My Fridays start on Thursday - I decide what I'd like to do, and occasionally that means sleeping earlier the night before to get up early and go.

Today was different. I lost a bag containing my wallet the night before, and hence didn't have my driver's license. Consequently I asked Cindy for a ride to work, which was not much later than my usual time. Going later, I saw a truck that looked like the optimus prime truck:

When I reached work, I found that my bag was kept behind the company cafe counter. Thankful that it was safe, and nothing was missing, I retrieved it and went for a run. This time it was shorter, as I started out later and returned earlier than usual. I planned to map Shaun's name, and had set a time as Sherry was coming along. A while later, this was written across the field: 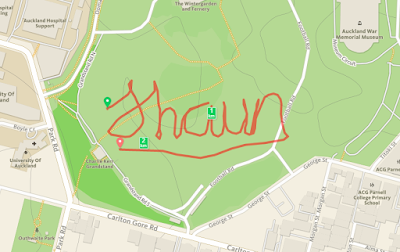 I felt this time the mapping came out pretty consistent and accurate. Initially I thought the size was good (when choosing how big to map the 'S'), but it was somewhat big enough to make the 'n' go onto the road. At least it was an inner road, rather than a main.

After work, I went to the office toilet. Upon closing the cubicle door, the handle fell off. I couldn't open it from the inside, and when someone tried opening from the outside, that handle fell off as well. Trapped for a moment, I was somewhat amused. Someone went to get some pliers to turn the inner workings of the door, but we managed to get the door open just as they got back.

I had a few bottles of cider to end the day. Not usually able to do that because I drive most of the time.

Unroutine is fun, in doses.
Posted by azriel at 9:38 PM